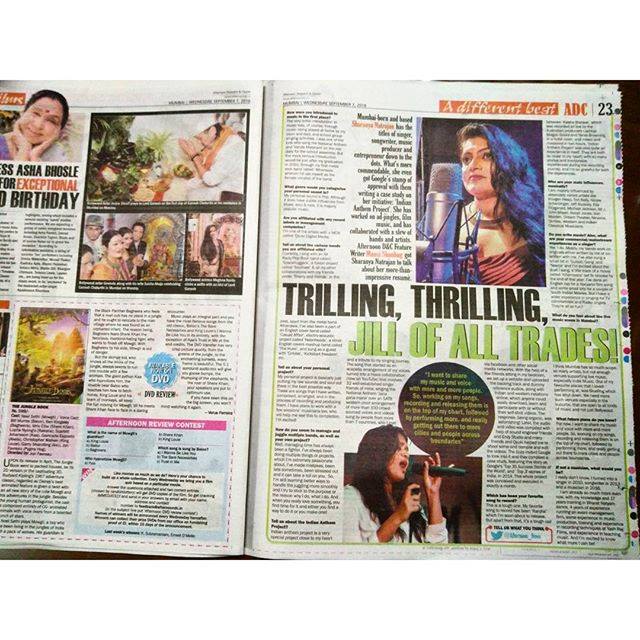 For those who missed it, get to know a little more about me. Here you go :-

TRILLING, THRILLING, JILL OF ALL TRADES!

Mumbai-born and based Sharanya Natrajan has the titles of singer, songwriter, music producer and entrepreneur down to the dots. What’s more commendable, she even got Google’s stamp of approval with them writing a case study on her initiative: ‘Indian Anthem Project’. She has worked on ad-jingles, film music, and has collaborated with a slew of bands and artists. Afternoon D&C Feature Writer Mansi Shanbag got Sharanya Natrajan to talk about her more-than-impressive resumè.

How were you introduced to music in the first place?
The very initial introduction to music was, of course, through music being played at home by my mom and dad, and school group-singing activities. I was one of the kids who sang the National Anthem and ‘Vande Mataram’ on the mic daily for the school assembly. But the more serious introduction would be just after my graduation in 2010, through my first metal rock band called ‘Athanasia’, wherein I’d call myself as the female vocalist of the band.

What genre would you categorise your personal sound in?
My personal sound is Pop. Although it does have subtle influences from blues, soul & rock, it is majorly popular music.

Are you affiliated with any record labels or management companies?
I’m one of the artists with a MCN called ‘Qyuki Digital Media’.

Tell us about the various bands you are affiliated with?
Currently, I sing with an Alt Rock/Pop Rock band called ‘Spacehuggers’, a fusion project called ‘Soulnest’ & all my other collaborations with my friends under ‘Sherry and friends’. In the past, apart from the metal band Athanasia, I’ve also been a part of an English cover band called ‘Casual Affair’, electro-acoustic project called ‘Neonheads’, a Hindi-English covers mashup band called ‘The Hues’, and sung as a guest with ‘Cirkles’, ‘Kickstart freedom’, etc.

Tell us about your personal project?
My personal project is basically just putting my raw sounds and soul out there in the best possible way. These are songs that I have written, composed, arranged, and in the process of recording and producing them. I have plans to work with a few sessions’ musicians too, who will help me see this to completion. I’m excited!

How do you seem to manage and juggle multiple bands, as well as your own project?
Well, managing time has always been a fighter. I’ve always been doing multiple things or projects, which I’m extremely passionate about. I’ve made mistakes, been late sometimes, been stressed out and it can take a toll on you.  So, I’m still learning better ways to handle the juggling more smoothly and I try to stick to the purpose or the reason why I do, what I do. And when you really love something, you find time for it and either you find a way to do it or you make one!

Tell us about the Indian Anthem Project?
Indian anthem project is a very special project close to my heart and a tribute to my singing journey. The song that started as an acapella arrangement of my voices turned into a mass collaboration (now on YouTube) that involves 32 well-established singer friends of mine, singing the National Anthem ‘Jana gana mana’ over an SATB western choir arrangement of more than 100 crowd-sourced voices and videos sung by people from more than 7 countries, who I met via facebook and other social media networks. With the help of a few friends sitting in my bedroom, we set up a website and uploaded the backing track and dummy reference audios, along with Indian and western notations online, which anyone could easily download, learn and participate with or without their self-shot videos. The response, being organic, was astonishing! Later, the audio and video was compiled with help of sound engineer friends and Enzy Studio and many friends and Qyuki helped me to shoot some and compile and edit the videos. The buzz invited Google to look into it and they compiled a case study, featuring this story as Google’s ‘Top 35 Success Stories of the World’, and ‘ Top 3’ stories of India, in 2014. This whole project was conceived and executed in exactly a month.

Which has been your favorite song to record?
This is a tough one. My favorite song to record has been ‘Ranjha’ which I’m soon about to release. But apart from that, it’s a tough call between ‘Kaahe Bisrave’, which was recorded all live by the Australian producers Lachlan Magoo Goold and Yanto Browning, in a hotel room, and mixed and mastered in two hours. ‘Indian Anthem Project’ was also quite an experience in itself. They are both so close to my heart, with so many stories and memorable experiences during the recording journey, and I’m so grateful for both the experiences.

Do you write music? Also, what are your commercial/mainstream experiences as a singer?
Yes, I do. Mostly, my bands work on originals either written by me or co-written with me. I’ve also sung a small bit in ‘Gulaab Gang’ and ‘Neerja’ and I’m excited about the duet I sang; a title track of a movie called ‘Khamiyaza’ set to release by the end of this year. I’ve done an English rap for a Haryanvi film song and some small bits for a couple of South Indian Movies. But I have a wider experience in singing for TV commercials and Radio Jingles. They’re all so fun !

What do you feel about the live music scene in Mumbai?
I think Mumbai has so much scope, so many artists, but not enough venues supporting live music, especially Indie Music. One of my favourite places that I loved performing at, was Bluefrog which has shut down. We need more such venues especially in the suburbs, that are open to all kinds of music and not just Bollywood.

What future plans do you have?
For now, I want to share my music and voice with more and more people. So, working on my songs, recording and releasing them is on the top of my chart, followed by performing more, and really getting out there to more cities and people across boundaries.

I am already so much more even now, with my knowledge and 17 years training in Bharat Natyam dance, 4 years of experience running an event management firm, some experience in music production, training and experience in recording techniques at Yash Raj Films, and experience in teaching music. And I’m excited to know what more I can be!

You can view the original article here : http://www.afternoondc.in/city-news/trilling-thrilling-jill-of-all-trades/article_176164